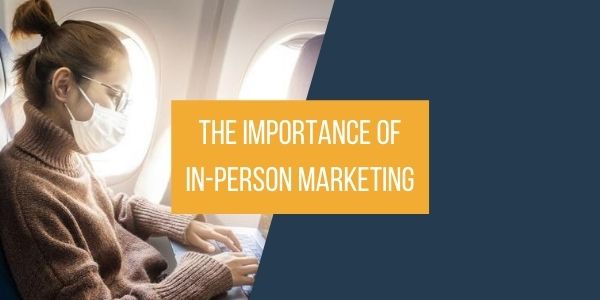 There’s no denying that companies have been struggling to figure out how to make virtual exhibits a successful replacement of real, in-person trade shows. The hard truth is that these companies likely won’t find a parallel solution. The reason for that is because in-person marketing is irreplaceable. A loss of exposure to a large, condensed audience of people with buying power and the inability to create real experiences surrounding brands are only a couple of the downfalls of losing the opportunity to exhibit and interact with attendees at trade shows.

We could go on and on about the benefits of in-person marketing. We list three big reasons why it’s so effective here, where we discuss interactive relationship building, instant feedback benefits, and the ability to generate a special kind of interest through real experiences, rather than digital experiences.

While in-person trade show marketing has been an important marketing tactic that businesses have been temporarily stripped of, companies are making it clear that face-to-face meetings are still a priority for them when doing business.

CEOs whose trade shows have been cancelled or postponed have lately been travelling across the country to meet with key decision-makers in their industry. Through this face-to-face meeting alternative, it’s evident that in-person connections are being missed. So, while trade shows are still down for the count, businesses are making it possible to see their buyers in other ways for the time being.

One example of this comes from a company that makes it clear that in-person marketing is a key aspect of their success. The software development company, Genvid, had planned to exhibit at Gamers Developers Conference in San Francisco. The company had planned several announcements regarding their games at this trade show. Genvid would have been able to reach thousands of game programmers, game designers, business and marketing professionals, producers, studio managers, virtual artists, sound engineers, virtual augmented reality creators, and sponsors, all in one place.

However, since the show was postponed, the company’s CEO, Jacob Navok, who had planned a keynote address, a round table discussion, and a party, decided that it was still important to visit with some of the major companies who had planned to attend the show.

Since the company does not have the capacity to hold virtual events that effectively portray their software, he felt that it would be a waste of time. So rather than creating a virtual exhibit, Novak spent a week flying to San Francisco, Los Angeles and Seattle to meet with companies, according to ABC News. He also repackaged his keynote address for interviews with journalists in the industry.

While he is doing the most that he can with the situation at hand, he will still not be able to meet with the majority of guests that he otherwise would have welcomed into his booth. He and thousands of other exhibitors across the country and the world are losing out on this important interactive business aspect.

Navok said, “It will suffice, but it cannot replace that in-person presentation and the ability to meet the people that randomly happen across your product. It’s a big week of announcements. We are still going to do it. We are going to have to — but that in-person momentum is not going to be there,” according to ABC News.

As we in the trade show industry know, face-to-face connections with a massive audience of pre-qualified prospects are irreplaceable. If businesses want to continue creating brand experiences, building trust, and growing on a large scale, trade shows are what we need to circle back to. This gives us confidence that when it’s safe, trade shows will be back in action, and the world will be trading as it once had.