Happy Retirement to our Managing Director 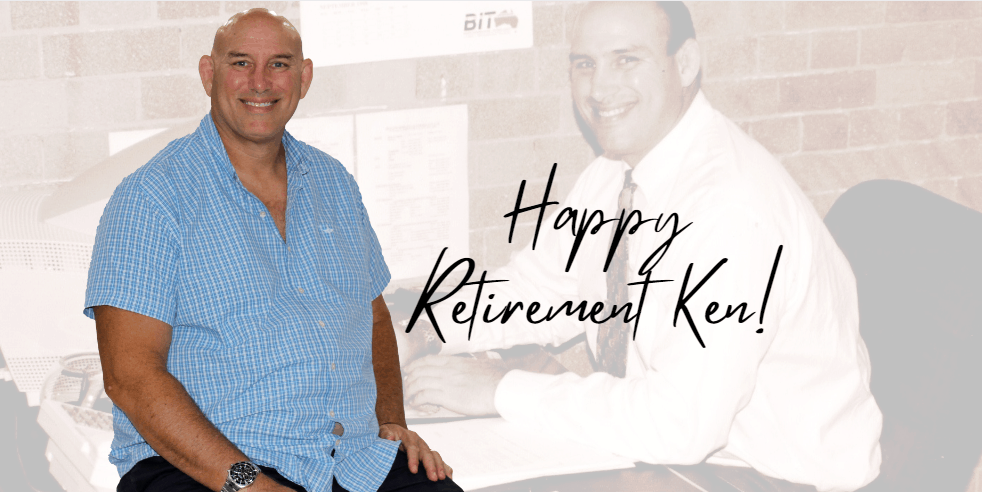 At the end of June, the Skyline team bid farewell to our Founder and Managing Director, Ken Cunz, who retired from the day-to-day operations of the business. Whilst he is still involved with the business, this marks a period of significant change for Skyline and for Ken.

Ken founded Skyline Displays Australia as a bright and eager 23-year-old American who had recently set down roots in Australia after falling head over heels in love with his Aussie wife Sue. Prior to the move, he had come across Skyline Displays Inc. in the U.S.A., their great product and newfound success and thought, ‘What does a guy with a degree in Sociology do when he moves to a foreign country – I’ll start a business!’.

In the 37 years of running Skyline Displays Australia, Ken has seen highs and lows but is most proud of the relationships that he’s built with the 157 team members (past and current) and our many valued clients.

Our team has been preparing for Ken’s retirement for some time but his absence in the office, along with his booming voice, is truly felt. Although our team will miss operating under the leadership of Ken, Skyline has been left in the capable hands of Jon Cunz, our former Operations Manager, who has stepped into the role of General Manager.

We asked Ken to reflect on his time at Skyline with a few questions that you can find below:

What college did you attend and what did you study?

I went to Stanford University in California and received a B.A. in Sociology.

I draw inspiration from everyday people all the time, but my Father (who was also my American Football Coach) is the voice in my head that continually inspires me to be better.

Who was your first client?

Melody Gates from the Commonwealth Department of Health is widely regarded as our first client in 1984 (incidentally, she continued to do business with us as part of Queensland Health until she retired about 8 years ago.).  There were also orders from both the University of Queensland and QIT (now QUT) at the same time.

Who is your longest standing client?

We have worked with Defence Force Recruiting from 1985 through 2016 (31 years), but have also worked consistently with Fisher & Paykel Healthcare over several events each year since 1996 (24 years). 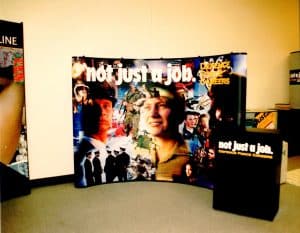 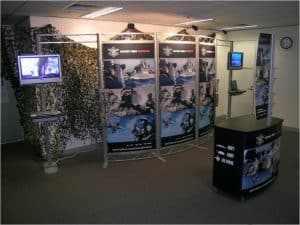 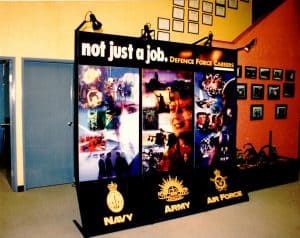 What are your top 3 Favourite projects?

A few of the large stands we did in the USA for Glenn Macgregor-Davies of Statseeker were great challenges and it was great to be challenged by a client who really believed in what we could deliver for him.

In pure size and scope, our work with Defence Force Recruiting every six years really helped to propel Skyline to new levels over the years.

But I have to say the work we are putting out now, across a whole range of clients,  is the best work we’ve ever done.

What are your top 3 Favourite Products? 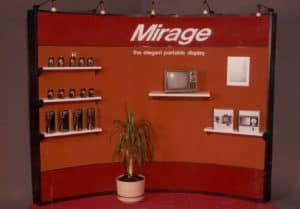 Mirage built Skyline in the early years.  It was truly revolutionary and clients loved it!

Inliten and Mini-Truss allowed us to access the market for much larger custom modular stands so it truly opened up our service offerings.

And in the past few years, Immerse and Amplify have bridged the gap between the two, delivering incredibly cost-effective solutions that can be combined to make impressive structures. 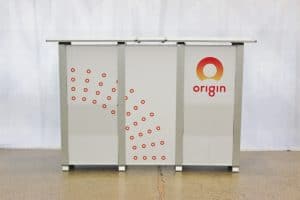 What is your favourite trade show accessory?

The Transaction Table is one of Skyline’s “Wow” products.  It is lightweight, easy to set up and cost-effective, ticking all the boxes for many clients.

If you could go back and give yourself advice when you first opened Skyline, what would it be?

Hire people of differing and diverse skill sets.  In the early days, I tried to hire people who were a lot like me.  What I really needed were people to complement my skills and fill in where I was deficient.  It took me a while to figure this out.

What has been your most rewarding part of Skyline? 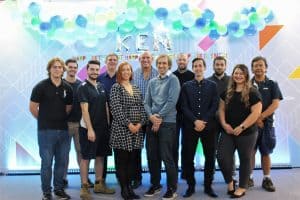 Without a doubt, it is our people!  I have so many great relationships with both current and past members of our Skyline Family. So many laughs, a few tears, and more than anything a place of welcome!

What was the hardest thing you had to face in your time running Skyline?

In my 37 years, making staff redundant (on three occasions) has been by far the hardest thing to deal with.  Yes, there have been other really tough moments, but it is so hard to let go of people who, through no fault of their own, must leave due to business conditions.  However necessary they may have been, it is impossible to escape the remorse that comes from knowing the effect that redundancy will have on the people affected and their families.

Do you have a favourite ‘Skyline Tradition’ that you have carried on throughout the years?

I don’t know how it started, but the way we sing Happy Birthday so out of tune and paying no attention to the words still cracks me up.

What is your fondest team bonding moment?

The trips we’ve taken as a team have been really special.  The first full team trip to Fiji in 2005 was the most memorable but the others, including late 2019 to Palm Cove were also packed with great experiences. 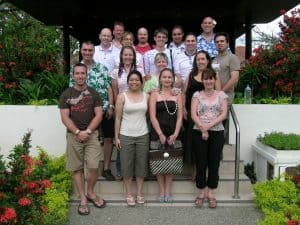 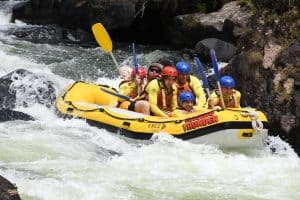 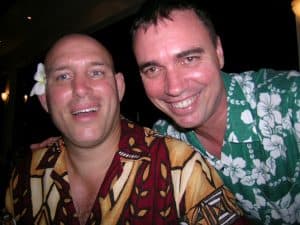 What is the most interesting experience you have had because of Skyline?

In the very early years of Skyline (May 1985), we had received interest from Defence Force Recruiting about our products.  They requested a meeting and demonstration and, as I didn’t have an office, scheduled it for my in-law’s home in Chermside.  On the day of the meeting, 3-4 vans of high ranking defence personnel from around the country arrived at this suburban home.  I’m sure the neighbours thought we were under attack or something!

What is the best thing about your job?

Without a doubt, it is the people I see or speak to every day and the conversations we share.

Sure, I love crafting great solutions for clients and knowing we’ve helped them meet their objectives, but it is these relationships I treasure most.

Which has been more valuable in your career? Education or experience?

Academics are great, but the learnt experience is so much more powerful.  If you remain open to learning from the world around you and underpin that with a strong ethical foundation, you are well placed to find success. 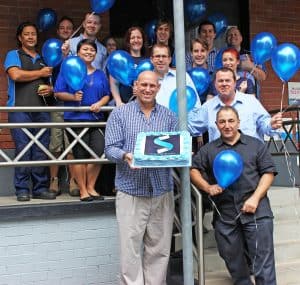 How would you describe the Skyline Culture?

I am deeply proud of our Skyline Culture.  We are open and accepting, whilst at the same time irreverent and full of humour.  We are incredibly diverse in background, yet are united in a common sense of values. It’s what makes Skyline special.

What has been your biggest Success Factor?

We’ve always focussed on delivering what the client needs from us in order to do business with Skyline.  Keeping the client at our core guarantees success because we don’t miss deadlines and won’t let our clients down.

Was there a career setback you faced which you later realised was an advantage?

We had a situation of serious misappropriation by a staff member many years ago when the business was going through a hard time.

That person spoke to the staff and admitted her mistake, but a few of our staff (and her friends) had already been made redundant.

Though the ramifications were far-reaching, I was so proud of our team at that time and how they responded to the situation.  I consider that was the real beginning of what made Skyline an extraordinary place to work. 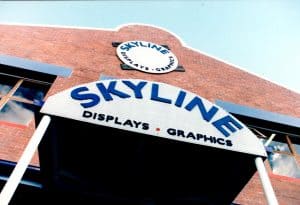 How many offices/locations have Skyline Displays Australia had? – Where were they and how long did we stay there?

Whilst Brisbane was always our home, we had offices in Canberra and Perth for over ten years.  We also had distributors in Sydney, Melbourne, Adelaide and Cairns.

What would you do differently if you could go back in time?

I really don’t believe in “Should have, Would have or Could have” so I don’t think I would change anything.  I’m incredibly grateful for everything in my Skyline career, even the setbacks and tough times. 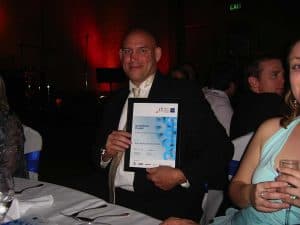 Where do you see the events industry going in the future?

As much as there have been predictions for years that virtual shows and events will replace traditional tradeshows and conferences, COVID has shown us that these virtual events fail to deliver the interaction that is the real reason why people attend.

What are your plans for Retirement? 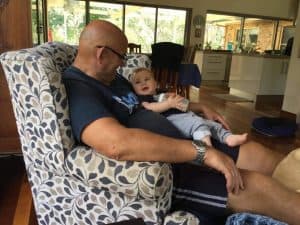 Whilst Sue and I will do some travel, we are looking much more forward to lots of grandparent time with our Grandson Remy (1 ½) and two little girls expected in the weeks before Christmas.

Lots of work around the farm at Upper Kedron awaits and there is still Rugby as long as my legs will carry me and Karaoke with my Autistic Nephew Tate each week.

Do you have any advice for your current team members at Skyline?

Keep our clients’ needs at your core, treat your fellow Team Members as Family and everything else will look after itself!