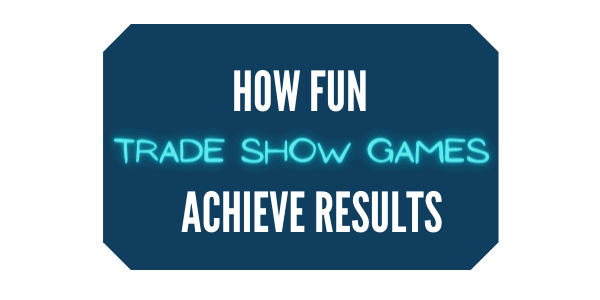 Trade show games will make your booth a fun place to be on the business-like trade show floor. But just because your attendees are having fun doesn’t mean you’re being silly on the company dime. Quite the opposite! Trade show games help you achieve serious marketing and sales goals, increasing the return on your marketing investment:

When trade show games help generate more leads and stronger relationships with those leads, it’s only natural that, if sales are your goal, then you will also increase the sales from those leads. Depending on your company’s usual sales cycle, you can see the boost in sales as your trade show leads close.

While trade shows are a fantastic place to get your company brand in front of thousands of potential buyers – guess what – there are hundreds of other companies who had the same thought, and they are doing everything they can to get attendees’ attention.

All these reasons compel attendees to enter your booth and play your trade show game. And in the process, attendees become more aware of your company brand (especially if the game is designed to match your brand colours, fonts, images, and logos, like ours do).

The fun of trade show games – and the potential to win prizes and bragging rights – drives greater booth traffic, filling your booth with more attendees who then become leads. And not just names, but true leads. Your booth staffers can talk to the greater number of booth visitors, and, by asking qualifying questions to determine which attendees are leads worth pursuing after the show.

When attendees are on the defensive when walking a trade show floor. There are hundreds of companies vying for their attention, time, and potential business. So, attendees have their guard up.

They are reluctant to engage with exhibitors because they don’t want to be hounded post-show.

That’s where trade show games help you build relationships. Attendees who are having fun in your booth playing games are grateful to your company for the fun – and view your booth staffers more as friends than adversaries.

When you as a trade show exhibitor are deep in the thousands of details executing your trade show program, it’s easy to lose track of measuring your results. And for many exhibitors, return on investment (ROI) is the ultimate metric.

We’ve seen exhibitors generate substantially higher ROI with our trade show games. They drive significantly more booth traffic, leads, and ultimately sales. All while spending only a fraction more on their exhibiting costs.