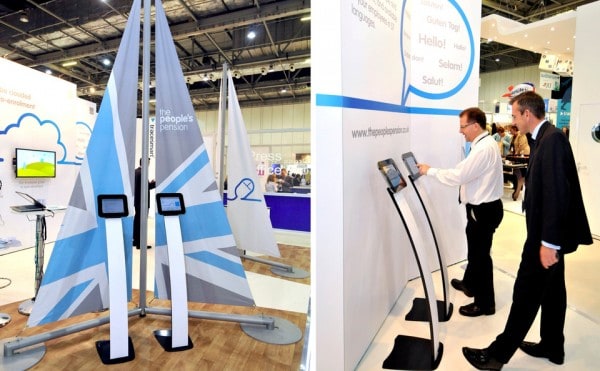 Digital is everywhere, so it is no surprise that almost every trade show exhibit has some sort of digital content. In fact, according to our latest research, 75% of exhibitors said they used technology and digital content in their booth in the past twelve months. That number increases to 86% for island exhibitors. Also, about a third of exhibitors that do not use tech now, plan to start using it during the next 12 months, which would increase tech use to over 80% of all exhibitors.

That said, another interesting point we learned during this research is that while in our 2015 exhibiting tech study showed the perception among exhibitors about using technology was overwhelmingly positive, in 2016 the response was more mixed. It seems that as more exhibitors used technology, some started discovering the issues that can come with it, especially if you are not prepared. Among the problems expressed were: high costs, interference with making a human connection, complexity, and bulkiness. The biggest problems identified had to do with lead retrieval systems. While these systems are incredibly helpful when they work properly, they can be a significant pain point when they do not. Always, ensure you have a backup system if the Wi-Fi goes down or if your lead app fails to synch up as planned. There is nothing wrong with having a paper backup to take down lead information just in case. There are plenty of ways to prepare early, and ensure your technology is in working order.

The digital content used at trade shows is overwhelmingly created by internal staff. In fact, 83% of our survey respondents create their own digital content. Unfortunately, much of this content is not as good as it could be. Many exhibitors limit themselves to a few simple slides or to just showing their existing website. However, island exhibitors are nearly three times more likely than inline exhibitors to have digital content created by their local marketing communications agency. If done right, and especially if incorporated into a broader marketing campaign, this same content can be re-purposed for other uses such as online ads, used within the lobby of a company, or for other events.

It may be worth it for you to consider having an agency create digital content for your next trade show or event and coordinate with the rest of your marketing team to split the cost.  The content could be videos, motion graphics, a microsite or an app. This same content could be used on your company’s corporate website, on social media, in an email campaign or in a lobby.  Think outside the box and you could all win by having consistent messaging that will be magnified by your coordinated effort and high-quality digital content.

About the Author:
Sofia is the Customer Engagement and Industry Relations Manager for Skyline Exhibits. An experienced marketing professional with branding, innovation and product commercialisation expertise, she heads up Skyline’s marketing efforts in customer engagement, exhibitor education, industry relations and market research.